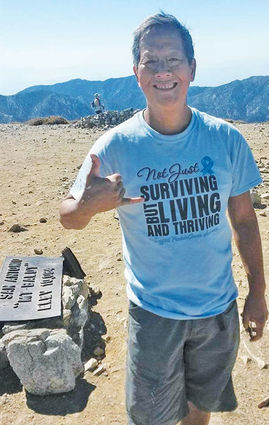 "Life's a marathon, not a sprint" - Unknown

Tehachapi dentist, Randall Kam, chronicled last spring that he has completed over 130 marathons and the 26.2 miles are nothing compared to his cancer diagnosis and subsequent journey of blood tests, scans, surgeries and chemotherapy.

Prostate cancer claims almost 30,000 dads, brothers, uncles, or husbands every year. One out of seven men will be afflicted and, as with many cancers, early detection may confer an almost 100% 5 year survival rate. A digital rectal exam (DRE) and PSA (prostate specific antigen) blood test may help screen men and give a physician enough data to make a decision on whether other tests are indicated. Men over 50 should ask their doctor about those tests, especially if they have urinary/sex issues. Most times it could be inflammation or benign swelling and meds may be able to help.

Kam had a PSA of 840(under 4 is normal) at his diagnosis in Jan. of 2015. He had metastases into the lymph node chain around a ureter and kidney failure was imminent. The DRE done by his urologist was normal due to the tumor being on the front, inaccessible side of the prostate. ADT (androgen deprivation therapy) was initiated to lower his testosterone, which fuels cancer growth. Removal of the prostate was not feasible.

He endured fifteen Taxotere chemotherapy sessions in 2015 and is now on Metformin and Lipitor to reduce blood sugars and fats to the cancer. The normal protocol is six chemos, but his PSA was in the 30s and his oncologist, Nilesh Vora, agreed to continue it until a plateau was achieved. Kam tolerated the sessions very well with no major side effects normally associated with the treatment. He fasted two days prior and that made his normal cells go into hibernation and the cancer stayed awake, got weaker and then were fed Taxotere. Kam continues to fast from 9 pm to 1pm the next day.

Vora in the OC Register stated "the same endurance that fuels his running enabled him to undergo the large number of chemo treatments that sent his cancer into remission."

Most prostate cancer is slow growing and many men pass from other diseases and may still live a long life just monitoring it. A healthy diet (plant based, low carb, and lean protein), exercise, and getting sufficient rest may help one cope with cancer. Exercise may perfuse the tumor with oxygen which may make it less aggressive and offset neuropathy in fingers/toes. Cardio may allow you to deal with the fatigue associated with the treatments and it is also an anti-depressant. It keeps the leg bones dense which could weaken with ADT and strong.

Kam completed six marathons in 2015 and twice, three days after chemo and both in May 2015. Number fifteen came four days after the Honolulu marathon: he feted the oncology staff with a bottle of Chandon.

His new calling is to have a sign on his back telling his plight during the races and encourage men to get checked. He is raising funds to support ZERO prostate anddo the NYC marathon in November. He will again sport a sign and hopefully be able to have his cancer saga influence others. His fundraising page is on http://www.crowdrise.com and under Randall Kam.

He recently summitted Mount Baldy at 10,064 feet as training with a dental patient, Chris Hall, for the Santa Rosa marathon which he completed on August 28.

A cancer diagnosis can be devastating and many go though denial, anger, depression, and hopefully get to acceptance and hope. An optimistic outlook is a great part of Kam's demeanor. His first grandchild born a month after the news and he hasn't looked back.

Kam has taken this and made it a positive by advising his dental patients to contribute to their health as they would to a retirement fund– the earlier one starts, the bigger the payoff. This tale of resilience will motivate people to get healthier in anticipation of some life-altering future medical event.

Kam's latest PSA is at 0.2 and he's looking forward to the Chicago marathon in October, NYC for ZERO and home in Honolulu in December. "But every marathon he runs means he's beating cancer. Cancer's not slowing him down." Vora said. 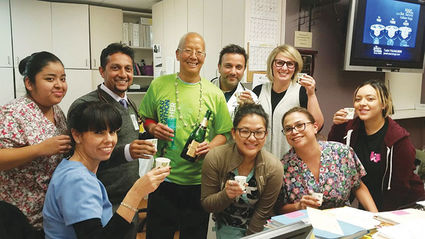 "All we have to decide is what to do with the time that is given us."

~Gandalf in Lord of the Rings