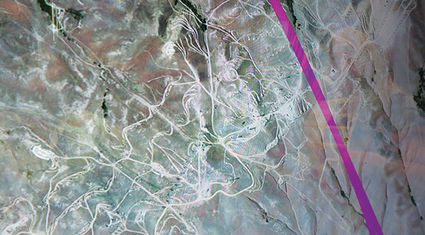 Aerial view of wind turbine service roads, east of Tehachapi. Proposed High-Speed Rail line is the diagonal on the right. Can you spot the bear face?

What is the name of the new hospital?

Budget yikes – Second District Kern County Supervisor Zack Scrivner's field rep Ryan Rush said that in 2014, the oil industry provided 35 percent of the county revenue. In 2016, with the drop in the price of oil, the industry contributes 15 percent of the county revenue. "Twenty percent drop in two years, that's pretty drastic," Ryan said at the Aug. 3 meeting of the Greater Tehachapi Economic Development Council (GTEDC) at the Tehachapi Police Department community room. Every county department is making painful budget cuts. Even so, he reported, the county is keeping the Kern County Fire Station in Golden Hills open. Ryan told Forde Files that to avoid cutting public safety budgets (sheriff, fire departments), all other departments would have had to cut 48 percent, which is not going to happen. "To get through these next four years," Rush said, "it's not going to be easy. There's not a lot of fat left to cut.

Build the bungalows! – Michele Dorner of Dorner Family Vineyard told the GTEDC on Aug. 3 that just the day before, Kern County planners issued the eagerly awaited permit for four guest bungalows at their Cummings Valley vineyard. The property is graded and ready to go. "We have contractors lined up like airplanes at an airport," she said. The bungalows, which sleep four in separate bedrooms, "will be like little Tuscan villas." Already booked for an event in April, the bungalows will introduce a charming option for visitors to the Tehachapi area.

High-Speed synergy – California High-Speed Rail (HSR) Authority spokesperson Valerie Martinez, in response to a question following her presentation at the GTEDC, said airlines will be active in managing the rail operation. "We haven't heard peep one from the airlines [in objection to the HSR]. They are looking at it as an option. Virgin manages the rail line in England." The airlines have the expertise on ticketing, scheduling and handling passengers, she said. She said that at full buildout in 2050 (Trains will be operational by 2029), operators anticipate a train will be running every 10 minutes. She said that in laying out the route, the planners are taking into consideration that one day a station may be built in Tehachapi. As of now, the plan is for the train to zip through between stations at Bakersfield and Palmdale. The train will be "steel wheel on steel track, not maglev (magnetic levitation)." The power source is electricity. See the last issue of The Loop for information on the proposed track through Tehachapi.

It's not a puddle yet – Tehachapi-Cummings County Water District Manager John Martin said Brite Lake (Jacobsen Reservoir) is at its lowest level ever. "Agriculture is thriving in Tehachapi," he told the GETDC. "There is a tremendous demand." Another significant reason the lake is low is that the pump engines at Plant 1 had to be replaced and they were not at full flow until June. "We're now at full flow," he said. For the rest of the season, he said, "We're just going to squeak by. We will be stabilizing the lake level before the end of August." Referring to a Los Angeles Times story about mercury contamination in seemingly clean high mountain lakes, Martin said that Brite Lake "has not been put on any list. It is not 'impaired water.'" He said if the Environmental Protection Agency (EPA) finds one fish with a trace reading of mercury, it declares the location "lake impaired." He said the U.S. Department of Agriculture considers the same level of mercury safe to consume and allows fish with the same level to be sold in grocery stores.