Tehachapi High School's 2016 Awards Night was held in the gym the evening of May 22. Families, teachers, and distinguished members of the community attended to watch THS's best and brightest be rewarded for their outstanding scholastic efforts.

The event began with an introduction form principal Scott Heitman, who expressed his pride and appreciation for these hardworking students. Dozens of academic accolades were handed out, which came in forms that ranged from tassels to medals to golden stoles. These were followed by the department awards, where teachers handed out medals to hand-picked students they felt deserved recognition in their respective subjects. Next up were the military-issued awards, as well as an announcement of all military enlistees from the class of 2016. Best of luck to the students entering the Air Force, Navy, and Army. Tehachapi applauds your bravery and commitment to your country.

Many scholarships were dedicated to passed loved ones who made a difference in Tehachapi and wanted to make a difference in the lives of students. They were introduced with heartfelt speeches and handed with greatest care to the lucky qualifying students.

It is clear the Tehachapi High School is turning out a senior class with some brilliant and dedicated minds. Student Denise Bui, for example, is the president of both the Interact Club and National Honor Society, and will be attending University of California Irvine in the fall. Upon receiving the National Honor Society Award, she gave further honor to counselor secretary Alicia O'Beirne, who has devoted much of her time and energy to the club. Josh Sparling is another example of Tehachapi High School's excellence, having never missed a day of school in his life. He received many honors that night, including the State Seal of Bi Literacy Award, and will be attending Pepperdine University.

Garrett Janney has taken every single Advanced Placement class the school has to offer, making for a total of 20 semesters of AP. Along with nearly every academic award, he received the department awards for math and the biological sciences. He will attend Cal Poly in the fall as a biomedical engineering major, and is the recipient of the Cal Poly Chrones Scholarship. His career goal involves the development of advanced prostheses. 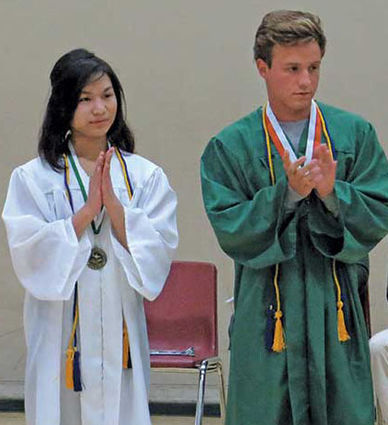 Evan Sheehan has completed 19 semesters of AP, and has been a student at Tehachapi High for two-and-a-half years. He will be attending Stanford, and has received the Stanford Financial Aide Scholarship, as well as the Law Office of Young and Wooldridge Award and the Kern Country Scholar Athlete of the Year. He is looking toward a career in management science or engineering.

It is rare that Tehachapi High appoints two people valedictorian, but looking at the collection of medals that hung around these boys' necks, as well as the host of academic and monetary awards they received, it is no wonder why the two of them will be sharing this honor.

Every student left with their graduation robes a little more decorated, and their futures even brighter than they already were. Congratulations to Garrett Janney and Evan Sheehan, and congratulations to the graduating class of 2016!