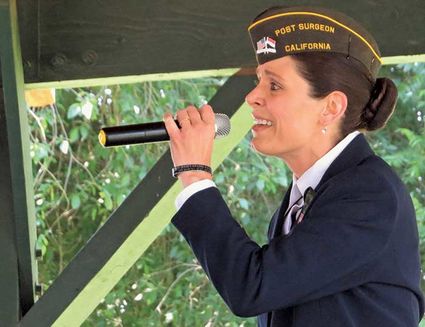 The annual Memorial Day parade kicked off at 10 a.m., with the sound of bagpipes playing Yankee Doodle and other American tunes the whole way through. Many groups walked in the parade, including the Bear Valley Springs veterans Association, the Tehachapi Mountain Scouts, the Civil Air Patrol Tehachapi Composite Squadron 46, and the Kern Country Scottish Pipe Band. veterans sped past in classic car models, often carrying flag-waiving family members or crowned winners of local pageants. The community lined the streets in folding chairs or on the backs of trucks, cheering for each passing veteran and thanking them for their service.

At the end of the parade, people gathered in Phillip Marx Central Park for a morning of appreciation and gratitude for those who have served in the armed forces. The ceremony had a variety of onlookers -- from veterans from all branches of service to leather-clad motorcycle riders to children wearing creative displays of the American flag. Members of the VFW Post 5948 performed the posting of the colors, and Jim Rice, Grand Marshall of the parade and sergeant in the Army in Vietnam, lead the Pledge of Allegiance. A beautifully operatic rendition of the national anthem was sung by Army veteran Christine Yandek. Chairs were set up in front of the gazebo at the center of the park, but many people chose to sit on the grass to listen to the speeches to be given.

The master of ceremonies, former mayor Ed Grimes, welcomed those in attendance with a lovely speech honoring military men and women. Grimes spoke of the camaraderie and togetherness all soldiers feel for one another, stating "When one of them falls, they all fall. And when one of them stands, they all stand. Shouldn't we stand with them?" The Memorial Day address was given by Chaplain Colonel Wes Clare, State Chaplain of the California National Guard. He touched on the importance of our military, how it has made America the strong nation it is and continues to protect us from terror across the sea today. Names of Gold Star comrades and recently deceased veterans were read out somberly, and a memorial wreath was presented for those who went into combat and have not made it home. A rifle salute was conducted by the AL Post 221 Honor Guard while Richard Oldenburg played Taps. The ceremony was rounded off with a performance of "Amazing Grace" by the Kern Country Scottish Pipe Band. 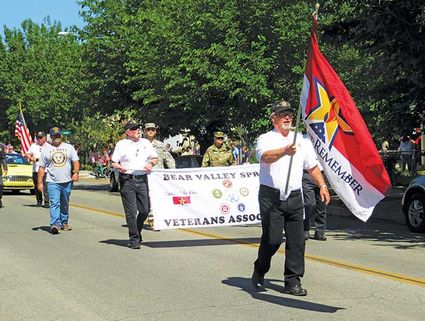 When the ceremony ended, refreshments provided by Tehachapi Albertsons were served by members of the American Legion Auxiliary Unit 221 and Tomo-Kahni Chapter NSDAR. veterans young and old of different wars and different branches of service greeted and conversed with one another. Civilians and veterans alike showed a spirit of patriotism and humble appreciation that permeated the air and resonated with everyone in attendance long after.