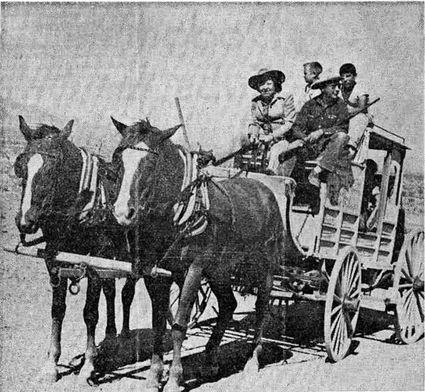 Before and after the ceremony dedicating a landmark in Garlock, Pancho Barnes, candidate for constable of the Rand Judicial District, rode children around the area in her old stagecoach, a relic of the early mining days. The sign on the side of the stage listed Mojave, Koehn Springs, Cantil, Garlock, and Rand, just as stages did in the area at the turn of the century. Each area listed except Mojave is within the district Pancho hoped to serve as constable come election day.

It always amazes me, when I think I have exhausted all of the files of my mother Marion Deaver, I find something new.

Yesterday I was searching through the file drawer and found a file that I had created when I started organizing all of this that was titled "Garlock". I obviously had forgotten about it so I pulled it out.

It was a gold mine!

There was an article about the dedication of the historical landmark placed there in 1960 to honor the early residents of Garlock. In case you don't know, what is left of Garlock is located on the Randsburg Road cutoff, off Highway 14, north of Mojave, just past the community of Cantil.

The event to dedicate the marker, which is still there today, was sponsored by the Kern County Historical Society, Native Daughters of the Golden West, El Tejon Parlor 239, Kern County Museum Committee, Desert Lions Club and American Legion Post 298.

The plaque was donated by the historical society and was affixed to a monument built by Max Hess, curator of the Desert Museum in Randsburg, using native rock from the mining area.

The dedication took place at the site of the monument in late May 1960. The plaque honored the residents, women and children, and miners who lived there and helped begin the early economy of Northeastern Kern County.

The miners many times were hard rock miners and drilled holes into the rock and then placed explosives in the rock to blast loose the ore. Because of that there were several holes placed in the monument in honor their hard work.

Garlock was once known as Cow Wells, and came into being as a source of water and supplies for the placer miners who rushed into the El Paso mountains in 1893. It was officially named Garlock when a post office was created and was named after Eugene Garlock of Tehachapi, who had a stamp mill there.

Between 1893 and 1896 more than 1,000 miners were searching for gold – and sometimes finding it – in the El Paso and neighboring hills. Later when the Yellow Aster Mine was discovered and developed in Randsburg, and its owners put in their own mill, Garlock began to dry up – literally.

Water was pumped into Garlock by Randsburg, but that eventually quit and with no water, the town died.

There are still some old buildings that are falling down in Garlock. The little community was made famous briefly when it was discovered that Charles Manson and some of his followers stopped at the Garlock jail remains and left their names there. Much of the jail has fallen to ruins from some area earthquakes since then, so there is not much left to see.

An interesting sidebar to the dedication day events featured local legend Pancho Barnes, who at the time was seeking election to be constable of the Rand Judicial District when the election was held June 7 of that year.

She had a large sign on a stagecoach she was pulling with two horses, and she gave children that day free rides, just as the stages did in the early mining days.

I am not sure who won that election but I am pretty sure I would remember if it was Pancho.