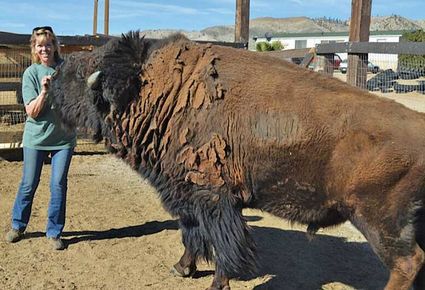 Some animals are just special. That perfectly describes Valentine. Who knew you could love a bison? But from the moment I saw Valentine, it has been that way.

It was early February when I got the call. A ranch in Cuayama had sold its herd of 300 bison for slaughter. One of the cows

had dropped a calf the week before and the owner was looking for someone to take it. Thankfully he didn't feel right letting the baby go off to slaughter.

And so on Valentine's day, 9 years ago, I headed to Cuayama, trailer in tow, to pick up the baby bison. I don't know why I thought he would be waiting in a pen for me, but that was not the case. He was somewhere in the middle of the herd. The owner said I would need to get him into a catch pen at the bottom of the pasture and then he and his men would crate him for me.

It never occurred to me to walk away. Instead I walked into the midst of these regal giants and began slowly moving mother and child toward the catch pen. It wasn't easy. I couldn't see over the herd so I had to bend down and keep track of the baby by looking under the herd. It had rained a lot that year, so I was working in mud.

I worked for almost three hours while the owner and his hands sat on the fence and watched. I am pretty sure they had a pool going for how long it would be before one of the critters realized what I was doing and decided to put a stop to it, but that never happened. Somehow, I managed to get mother and baby along with two other bison in the catch pen. Soon Valentine was loaded into my trailer and we were headed home.

I can tell you, he was not a happy boy. He bristled at the very sight of me. There was no way I could get close enough to him to start him on a bottle, so I resorted to formula in a bucket. Somehow he managed to figure it out, and so it was that Valentine and I began to bond, slowly at first. And then, as if we rounded a corner, we were friends and have been ever since.

Bison are amazing in so many ways. They are the largest land mammals in North America. It is hard to appreciate them unless you get up close. They are so large it is hard to believe how fast they can move. 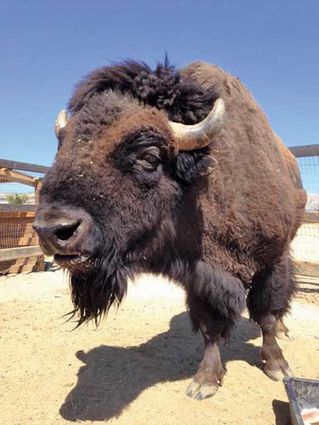 Their massive heads act as snow plows in winter, moving the snow to reveal the grasses below. The hump on their backs is there for one reason only, to balance that massive head!

It is no surprise to me that the bison was just declared our National Mammal. Regal, strong, and a symbol of this country's history, the bison joins the bald eagle in representing the United States of America.

Anyone who visits the ranch walks away with a new respect for bison and many fall in love with Valentine. If you have never been up close and personal, come on out and meet Valentine. He loves carrots and would really love to meet you. We are open Saturdays from 10 a.m. to 4 p.m.