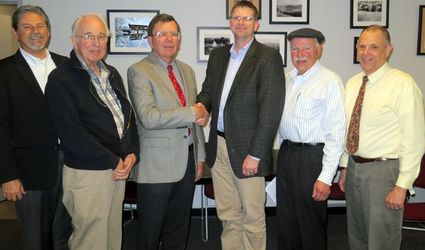 The Tehachapi Valley Healthcare District board of directors adopted a resolution at its Feb. 16, 2016 meeting approving the lease of all the district's facilities to Adventist Health for a period of 30 years.

The agreement includes a $27 million pre-payment on the lease that will enable the district to complete construction of the new hospital.

"On behalf of Adventist Health, I express my appreciation for the process that has gone on for 18 months," San Joaquin Hospital President and CEO Douglas Duffield told the board. "The relationship is not just for completion of hospital, it will be one that benefits the community and residents of community for decades to come."

The affiliation proposal must be approved by residents of the district, who will vote on the measure in the June 7, 2016 election. A simple majority of 50 percent plus one is required to pass the measure. A public vote is required under the California Health and Safety Code because it involves more than 50 percent of the assets of the district as well as the sale of equipment and personal property.

Voter approval of the measure means that Adventist will take over management and operation of the existing hospital and the district's clinics in Tehachapi, Mojave and California City, and that construction of the Tehachapi Replacement Critical Access Hospital will be completed as designed.

The board approved two lengthy affiliation documents that had been hammered out over the course of more than a year between district counsel Scott Nave and Adventist lawyers. The documents are available on the healthcare district web site, tvhd.org. To read them, go to "governance," "board of directors" and "minutes and agendas" and click on "Affiliation Agreement" and "Master Facility Lease Agreement Draft." Some lists are yet to be included.

The new Tehachapi hospital will be licensed and open in 10 months, Project Manager Stacey Pray said.

The existing hospital, built in 1957, does not meet California seismic standards and will be closed as an acute access facility. The drive to build a new hospital began decades ago. The public approved two bond measures, one for $15 million and another for $50 million. Before work could get under way, an environmental challenge halted construction for a year.

The existing hospital is located on F Street in downtown Tehachapi. The new hospital is being built at Capital Hills near the Post Office on the north side of the freeway, on land donated by the Broome family.

The Feb. 16 board meeting was held at the Tehachapi Area Association of Realtors office in Tehachapi. The vote was 4-0, with board member Don Napier absent.

"I am really happy to see this thing," said Dr. Sam Conklin, long-time board member who has seen the project through from the beginning. He made the motion to approve the affiliation. Board member Duane Moats seconded the motion.

See the full story in the February 20 issue of The Loop.