Successful "Night in the Vineyard"

An event in support of the Norbertine Canonesses of Tehachapi

Above are some of the items made by the Norbertine Convent that were available at the event.

It all started with a tea party and the latest chapter closed with a bright moon shining over "A Night in the Vineyard," on Saturday, August 29, at the Triassic Vineyard. There, a sold-out crowd of 130 enjoyed delicious food and wine and lively auction action, in support of the Norbertine Canonesses of Tehachapi.

The event – the first of many we are told – was organized by "Friends of the Norbertine Sisters in Tehachapi," a group that started after several local women attended a fundraising tea in Orange County in October 2014, hosted by "Sisters Helping Sisters." The Norbertines have a strong community in Southern California, where the Norbertine Fathers have been based for more than 50 years, having made their home there after the seven founding Hungarian canons fled Communist oppression in Eastern Europe. The Tea inspired Liz Wolfe (Chairman), who felt a similar event in Tehachapi would be beneficial and she approached Mother Mary Augustine to seek approval. It did not come quickly by Liz's expectations, as the Sisters take all important decisions to God through prayer and discernment. They do not actively seek donations and publicity, and they feel that God's hand must be in all activities taken upon in their name.

After approval was obtained, the organizing committee became creative and hosted a Bunco Night – also at Triassic Vineyard – to help raise the initial funds needed for the dinner/auction. For the more than 48 men and women who enjoyed the games and wine, it was a spirited evening, full of laughter and fun.

Triassic Vineyard provided a wonderful venue for the first annual dinner/auction, creating expansion with tents to host the larger group and provide an area for display of the auction items and merchandise from the Sisters' Gift Shop, including items handmade and homemade by the Sisters. Vineyard proprietors Jim and Sally Arnold comfortably moved about and enjoyed the evening with their guests. Jim Arnold felt that the organizing team did a great job and made the event work easily. This was the first fundraising event of this magnitude his vineyard has hosted, and he found it to be a positive learning experience. He credited the organizing committee's hard work, much of which he witnessed during their setup at his venue. His sister, Annie Arnold (Triassic Vineyard Event Coordinator), worked closely with the organizing committee.

There were a few hiccups in the beginning, but much less than one would expect from a big event being hosted for the first time. It was very gratifying seeing the loving coworker camaraderie displayed by the event hosts; dozens worked together in such positive energy and hospitality, creating a spiritual atmosphere in an evening dedicated to supporting our Sisters here in Tehachapi, who add so much to the spiritual lives of all who know them.

The evening started with wine tastings from Triassic's collection accompanied by delicious hors d'oeuvres. Among the wines available were a chardonnay, two viogniers, a zinfandel and a tempranillo (new personal favorite). Live music provided by local musicians Tom Carlson and Emma Gazley accompanied the many conversations as people meandered through the tasting room and sheltered balcony areas and browsed and bid on the many silent auction items.

The Greek dinner was catered by Mano Lujan (owner of local restaurants, The Shed and Red House BBQ) and friends from St. George's Greek Orthodox Church in Bakersfield. It consisted of succulent kebabs, mint rice, salad, hummus, pita bread and spanakopita. (Shannon Counihan proudly offered this final dish, stating she wished she were Greek!) It was wonderful to enjoy with more Triassic wine and great dialogue with people from areas near and far. Though many Tehachapi locals were present, there were also people who came from as far away as Chino, Orange County and even the State of Utah. Bakersfield also had a strong representation, with many long-standing friends of the Sisters, as well as new ones, as a newscast on local station KGET Channel 17, written and produced by News Anchor Jim Scott, raised the interest in that community (so much so that there was a waiting list).

Jim Scott was also the evening's emcee and was scheduled to host the live auction, but he willingly handed over that responsibility when one of the guests – Eddie Lugo of Chino, CA – turned out to be a professional auctioneer. The auction truly went into high gear and had a dynamic energy that helped raise even greater than expected amounts of money for the Sisters. Melt-in-your-mouth baklava donated by the Khoury family, Owners of Petra's Mediterranean Deli and Restaurant, was served as the live auction began. This reporter had three pieces and plans to make it a regular order from that delicious deli.

The evening also included a brief talk by Mike Psomas, a special friend of the Sisters, who shared his witness of the hard work of the Norbertine Sisters. Though their days are very full with scheduled Mass and prayers throughout the day (including midnight prayers), they also include four hours of scheduled work time, during which each sister has specific responsibilities to keep the monastery working in top form. Mike commented that the Sisters accomplish more in those four hours/day than twice the number of people do in the outside world.

All funds raised from the auction and related events are planned to help the Sisters with Phase 2 of their monastery construction – the building of their new chapel – the most pressing need of the sisters with their ever-growing numbers and that of the faithful. Their current chapel consists of the converted living and dining areas of the main house that was on their Water Canyon property since the 1950's. The cloister choir area (where the sisters sit separated from the public) was expanded after Phase 1 (the Sisters' living quarters) was completed, but still can only accommodate a small number of those that come to participate in Mass on the mountain. It is not uncommon to have congregants standing outside in the garden area, next to open windows, since the seating area consists of four short pews and chairs around the perimeter of their small chapel. Attendees of the auction had the opportunity to view the new chapel plans and listen to Architect Mark Russell share the vision behind his design during the evening's presentations. The Sisters have been blessed by his talents and his friendship. 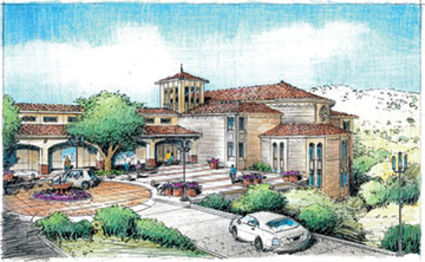 Architect rendering of Phase 2 of the Norbertine Monastery Construction – the building of their new chapel – the most pressing need of the sisters with their ever-growing numbers.

The Friends committee plan to make this an annual event, and if this year's response is any indication, it promises to be a quick sell-out in the years to come. To ensure your opportunity to participate, follow the Friends of the Norbertine Sisters on Facebook for activity updates. You will also be able to receive notifications of future Bunco and other fun activities around the Tehachapi area, to help our Norbertine Canonesses.

If you would like more information about the Norbertine Sisters, please visit their website at http://www.norbertinesisters.org. Prayer requests can be submitted to pray_req@cybersurfers.net or by calling (661) 823-1066.

For those that can't wait a year for the next dinner/auction, the Family Life Pregnancy Center is hosting theirs on Sept. 19 at the Dorner Vineyard. Like last year, it promises to be an amazing evening.

More information about the event can be found in a separate article in this publication (page 22) or by contacting the Center at (661)823-8255.

This reporter will be there for more auction fun!