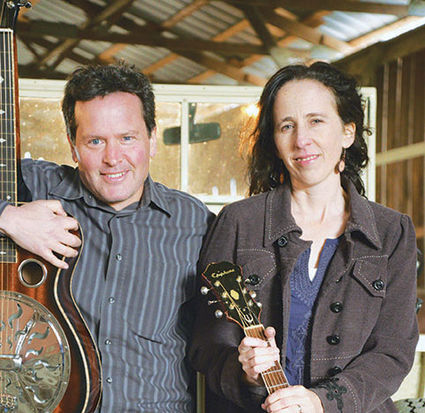 As a descendant of Cornish miners who had a tradition of singing while they worked in the mines, singer-songwriter Rita Hosking grew up with a deep regard for the power of the human voice. In her songs, she draws on her own childhood growing up outside of Mount Shasta, as well as her family's roots in the gold mines of Grass Valley. She sings of forest fires, demolition derbies and the hopes and dreams of the working class in the small town of her youth. While rooted in Northern California, Hosking's music moves through her sense of place to touch the universal themes of our lives.

She and her CDs have won awards and honors in Country, Folk and Songwriting categories. She has been compared to Gillian Welch, Emmylou Harris and Nanci Griffith. Her powerful voice has been called, "gritty" and "earthy" as well as "sweet and sinewy."

In her concert at Fiddlers Crossing on May 15, Hosking will be joined by her husband, Sean Feder, playing dobro and banjo. Feder has an eclectic musical experience that includes guitar, piano, vocals and percussion. He taught group hand drumming classes at UC Davis for 10 years. He has performed with such artists as Joe Craven, Arthur Hull, and the Bay Area Celtic band, Driving with Fergus. He studied banjo with Bill Evans, (who recently appeared at Fiddlers Crossing with Dan Crary and Steve Spurgin) and dobro with Rob Ickes. Feder sees as his mission, "to serve the groove and melody in order to reveal, kindle and lift the spirit of the music."

The concert starts at 7 p.m., with doors opening at 6:30. Tickets are $20, available at Tehachapi Treasure Trove, Tehachapi Furniture, Lucky's Barbershop, or at the Fiddler's Crossing Wednesday Open Mics and First Fridays. Tickets are also available online at Fiddlers Crossing.com, and may be reserved by calling 661-823-9994. Fiddlers Crossing is at 206 East F Street, Downtown Tehachapi at Robinson. Buying tickets early is strongly suggested.