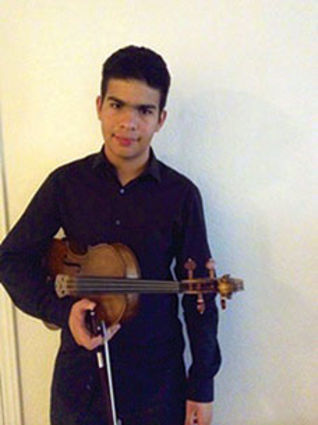 Join us for our summer concert featuring our Young Artist Competition winner and selections with the Tehachapi Symphonic Chorus. Sunday, May 17, at 4 p.m., at Country Oaks Baptist Church, located at 20915 Schout Rd.

Pedro was born on January 26 of 2000 in Maracaibo, Venezuela. He began his musical studies in 2010 in ''El Sistema'', a music project founded by Master Jose Antonio Abreu 40 years ago, with Dalia Garcia and Cesar Suarez. He has played in several orchestral ensembles among those the Youth Orchestra of Maturin and in the Regional Orchestra of Monagas State and as a soloist with the Maturín Chamber Orchestra.

In 2012, after a rigorous nationwide process of auditions, he became part of the National Children Orchestra of Venezuela which performed successfully in Salzburg's Festival 2013 under the batons of Simon Rattle (Berliner Philarmoniker), and Gustavo Dudamel (Caracas) in 2014.

He continued his musical studies in Bakersfield, California in August 2014, under the instruction of Rebecca Brooks. Since February 2015 he is attending the Colburn School of Los Angeles. He is member and first chair of the Bakersfield Youth Symphony Orchestra, the 2014 Kern County Honor Orchestra and the Centennial High School String Orchestra where he is a sophomore. He has worked with conductors like Rey Cantor, Cesar Suarez, Andres Gonzalez, Jorge Velasquez, Maxim Eshkenazy and Matthew Ouska.

There is a reception following the concert so community members may meet the soloist, symphony director and members.

Admission is always free to the community. Orchestra members are currently selling raffle tickets for a drawing to be held the day of the concert with a grand prize of $1,000 to be awarded. Tickets are $5 each or eight for $25. Prizes to be awarded will include the grand prize, a glider ride from Skylark North, framed print of Claude Monet, a beautiful hand-made quilt crafted by Dorthy Seiwell, a chance to conduct the orchestra or win a String Quartet for an evening, as well as many gift cards generously donated by businesses throughout the community. The orchestra is fully supported by private donations and fundraisers held throughout the year.