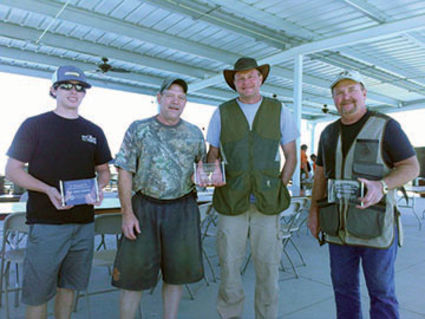 "We are pleased to have been able to not only host 10 teams of shooters, but to enjoy a nice day, pay tribute to one of our 20-plus-year members who lost her battle to cancer earlier this year, have a fun time, a good lunch and raise a little bit of money to help keep this all-volunteer unit to stay afloat and keep running, so we may continue to 'search so others may live,'" said Robin Jackson, who is also a 20-plus-year TMSAR member.

Most of the shooters showed up during the eight o'clock hour to sign up for the one-day shoot. Shooters hit the course at 9 a.m. with all competition completed by 1 p.m. While the scores were tallied the shooters enjoyed a hamburger and hot dog lunch served by members of the TMSAR.

After lunch the winners were announced.

The highest scoring youth shooter was Kody Miller, age 18, (pictured above) who aimed and successfully hit 69 orange and black clay pigeons. This Bakersfield young man has learned gun safety and more from his dad.

"My dad taught me to shoot and we get to go hunting ducks and enjoy shooting sporting clays together," Miller said.

The top woman shooter was Lynn Moon (pictured above right) who shot an 81. "It does feel great to have outshot my husband today, especially since he was unsuccessful at distracting me while I was shooting," Moon said, with a light chuckle and smile. Moon, who has been only shooting for three years, added, "This is the second time I have beaten him and there was one time we tied."

The top scoring man, Craig Gunderson, who shot an 89 out of 100 was also on the winning 4-shooter team consisting of Gunderson, Chris Parks, Donald Holland and Payton Parks. The 4-man team shot a 311 for the day.

The keepsake shooting trophies and bragging rights was not all that shooters got to take home with them. This year's raffle enabled a few shooting enthusiasts to add a few more firearms to their collections.

"We are please we were able to raffle off four firearms this year," Dory Kline, 25-plus-year TMSAR member said.

The TMSAR held a pre-event raffle and was able to give away a Remington 870 rifle with two interchangeable barrels. "This rifle comes with a slug barrel and a rifle barrel," said Kline. They also gave away a Ruger American Rimfire .22 caliber bolt-action rifle and a Smith & Wesson Shield .40 caliber handgun with the pre-event raffle ticket sales.

In addition, each shooter was given an additional raffle ticket that entered them into a separate drawing for a camo (finished) 10/20 takedown rifle, but you had to be a competitor to have a chance at this rifle.

There was more. "Thanks to the generosity and support of our donators throughout Kern County, both gun related and not, we were able to give away a number of other items, including, but not limited to handmade duck calls, certificates for gun safety courses, a God Membership to the 2nd Amendment Shooting Range, a hand gun safe, wine from local vineyards and more," Captain Jeff Snyder of the TMSAR said. 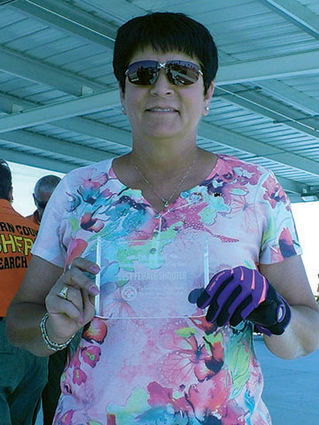 Lynn Moon of Bakersfield won the top honors for the women's division of shooters.