Sky Watch: Keeping an eye above the horizon 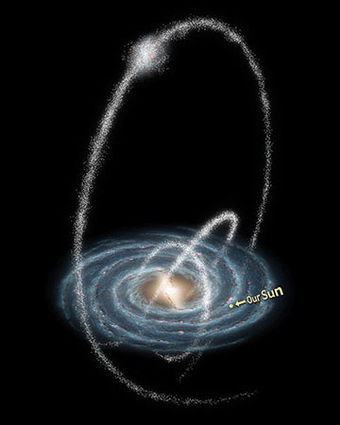 "The discovery of stellar streams adds lovely embellishments to our already beautiful galaxy. You can help establish exactly where they all are." Credit: NASA/JPL

How many of us still cling to the image of the astronomer as a stiff-moving caricature in a white lab coat and oversized spectacles, pacing around while staring at the ground, or peering through a telescope that sticks out through the dome of his observatory? Poindexter's uncle (from the Felix the Cat cartoons) was always a personal hero to me. Though abrasive and unsociable, he represented the most sublime of human endeavors – the expansion of our knowledge of the cosmos.

Until recently, it has been very difficult for amateur astronomers to make meaningful contributions to our body of knowledge. For the vast majority, astronomy was strictly a spiritual and intellectual pastime. However, our electronic world has changed this. Today, "amateurs" are using equipment that totally outclasses anything seen in the nineteenth century, and rivals that of the early and mid-twentieth century. These elegant instruments are used to find comets, asteroids, and have even begun to contribute to the search for planets around other stars.

To be sure, such instruments, along with their associated support hardware and software, cost about as much as a snazzy new car. But you don't have to spend that much to make a meaningful contribution. Nor do you have to live on a mountain top in New Mexico. Today you can rent time on such a scope from your home office! Just type "rent telescope time" into your web browser to get started.

The Internet provides many other ways to contribute to the exploration of the cosmos. Our instruments are compiling so much information that we're having trouble analyzing it all. There are a number of programs employing the help of "citizen scientists" to look for interstellar dust, to classify galaxies, and even to look for radio signals from outer space.

In 2004, NASA's Stardust probe passed through the tail of Comet Wild 2. It had a special compartment that contained 'aerogel' for collecting miniscule particles -- "comet dust." Stardust brought its collector home safely in 2006. Yet, as its name implies, comet dust isn't really what we were after; the mission objective is 'stardust,' interstellar particles from distant stars.

Sifting through the thousands of tiny particles contained in the aerogel isn't easy. It's "like searching for a handful of ants on a football field...one five centimeter square at a time." So, the Space Sciences Institute at U.C. Berkeley is asking for the talent of citizen scientists to help sort through the aerogel. You can participate by going to stardustathome.ssl.berkeley.edu. After a short web-based tutorial, you'll be using a "Virtual Microscope" to begin your search for stardust.

To date, only seven particles have been identified that appear to be of interstellar origin. Frankly, I'm very impressed that we've been that successful! We've actually snatched bits of other stars careening around the galaxy and brought them back to the laboratory for analysis. Perhaps you will find the next one!

Galaxy Zoo is another distributed networking effort to classify millions of galaxies from images captured by the Sloan Digital Sky Survey, the Hubble Space Telescope, and the UK Infrared Telescope. This data will help refine our understanding of how galaxies form and evolve. If you want to be the first to gaze upon an entire alien galaxy, go to http://www.galaxyzoo.org. They'll walk you through the nuances of galaxy classification, and then turn you loose as a citizen galactic astronomer.

Millions of home computers sit idle most of the time. That's a lot of computing power that goes to waste. A small fraction of that power has been at work on interstellar problems since the late 1990s. These owners allow their idle computers to connect to a distributed network and then get to work crunching data from projects with massive databases.

[email protected] uses 38,000 computers to create accurate three-dimensional models of the stellar streams that encircle our galaxy. These are the remnants of dwarf galaxies or globular clusters that have been torn apart by galactic tidal forces and strewn along their orbits around our galaxy.

[email protected] has 44,000 volunteers searching for gravitational-wave sources and radio pulsars. Forty-nine such pulsars have been discovered in this way, so far.

Perhaps the most intriguing effort to harness the power of the Internet is [email protected] (Search for ExtraTerrestrial Intelligence). Over 100,000 home computers are sifting through signals received by the huge Arecibo Radio Telescope in Puerto Rico looking for electromagnetic signals from alien civilizations. This project, also operated by the Space Sciences Institute in Berkeley, has been underway since 1999. Of course, they haven't found any conclusive evidence of extraterrestrial intelligence (or we'd all certainly know about it!), although there are "several candidate targets" requiring further analysis. However, less than 2% of the sky has been analyzed to date. The search must continue since discovery of an alien civilization would certainly be the most profound discovery in all of human history (and since the cost of the project is negligible).

Citizen astronomers have always tended to be a self-educating lot. The Internet has really unleashed that predilection. The number of colleges and universities offering on-line astronomy courses is steadily growing. Fully accredited on-line undergraduate and graduate degree programs are now available. Thus, the most dedicated amateur astronomers are joining the ranks of the professionals while keeping their day jobs. Still, for those not interested in a sheepskin, the Internet provides such a wealth of information that anyone can thoroughly educate themselves.

Lastly, I must comment on the contribution of astrophotographers. Poindexter's uncle is not at liberty to "waste" time composing beautiful images with his huge telescope; his mission is the "acquisition of data." Such compositions are the missions of the artist, not the scientist. Grasping and communicating the sublime elements of astronomy is where the amateur astronomer rules. I won't demean their work by putting them on newsprint. You can find plenty of them in Sky & Telescope or Astronomy magazines, or on plenty of websites.

Of all of the sciences, astronomy has always been open to and welcoming of the citizen scientist. It's a big universe out there, and we can use every talented mind to help unravel its secrets.

The Eta Aquarid Meteor Shower puts on a show on the morning of May sixth. However, the moon will be bright, washing out the dimmer shooting stars.

Mercury is at its best as May begins, shining at magnitude -0.4 in the western evening sky. It then begins a sun-dive. By the end of the month, it will reach inferior conjunction (passing between the sun and the earth). Venus will remain high in the evening sky as Jupiter works his way toward her throughout the month on their way toward a dazzling conjunction in July.

Saturn rises in the east soon after sunset. It's busy working its way backward amongst the stars in its retrograde loop, reaching opposition on May 22 . That puts Saturn at its closest. Its rings are still wide open; therefore, Saturn is about as bright and beautiful as it gets.

Is there a topic you'd like to see covered in Sky Watch? Did you catch a slip-up? Did I touch a tender spot? Send me your thoughts at [email protected]