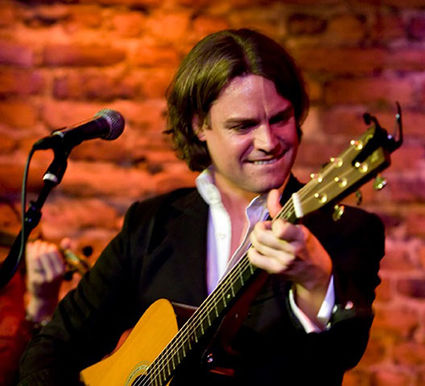 Pop singer-songwriter Jann Klose will be performing at Fiddlers Crossing on January 30 at 7 p.m.

Jann’s new album MOSAIC is now on almost 100 radio stations, and on iTunes, Amazon, Spotify, and Pandora. He has released a special edition of MOSAIC that includes songwriter demos of favorite originals on the album, plus a new song “Anything,” that was not included on the original release. MOSAIC is a sonic, lyrical and emotional mosaic from an artist known for his multi-cultural roots, a widely-faceted career, and a “soaring voice” that “wins over the listener” according to the Washington Post. MOSAIC follows the indie success of REVERIE (2008) and SACRIFICE EP (2010) and the music video for DOING TIME. Produced by Grammy winner James Frazee (Esperanza Spalding, My Morning Jacket) and David Bendeth (Paramore, Bruce Hornsby, Elvis Presley).

Jann won the Vox Pop (People’s Vote) in all four categories that he was nominated in this year’s Independent Music Awards. They were for eclectic categories in music and design, including for his cover of Tim Buckley’s “Song To The Siren.” Jann also appears on ACTION MOVES PEOPLE, which won the Vox Pop and music industry competitions in Various Artists: Spoken Word.

He has recently been featured in C-NET, WBZ-Chicago, RELIX, KPFK-Los Angeles and ENTERTAINMENT TONIGHT Online. Two of Jann’s songs are in the new award-winning Australian documentary VENUE FOR THE END OF THE WORLD (Devil Blue Films) which Jann, also, appears in alongside of Ian Anderson and Dick Cavett.

Newly released is “Mary Magdalene,” a music video that Jann and songwriting partner Gary Lucas created along with executive producer Dan Beck. The video is helping to get donations sent to the Island Park Volunteer Fire Department as the community of Island Park recovers from hurricane Sandy. View it at https://www.youtube.com/watch?v=SA-GJNH0I38

Born in Germany, raised in Kenya, South Africa, and Hamburg, Jann came to the States as an exchange student in Cleveland. He performed in touring productions of Broadway shows (JEKYLL & HYDE, JESUS CHRIST SUPERSTAR) and portrayed The Pinball Wizard in THE WHO’S TOMMY before he started his band. He now lives in the Bronx when he’s not touring around the world.

Jann sings the part of Tim in the movie, GREETINGS FROM TIM BUCKLEY, and his music is heard on the GRAMMY-nominated HEALTHY FOOD FOR THOUGHT, on MTV CRIBS, the movie “Dead Broke” (Warner Bros.) featuring Paul Sorvino. He maintains a steady touring schedule of about 75-100 shows a year in the U.S., Europe and Asia.