By Tina Fisher Cunningham
The Forde Files No 84 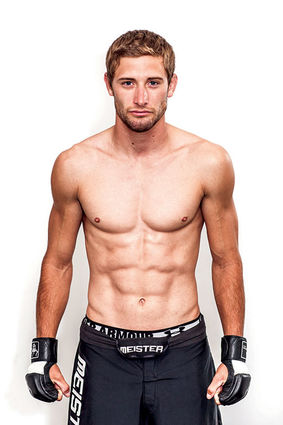 Richie Meister, 23, of Tehachapi is fighting his way to the top in the Mixed Martial Arts competition circuit, posting his first professional win Nov. 29 at the Hollywood Park Casino.

His opponent in the 135-lb weight class defaulted so he agreed to be matched with an opponent 10 pounds heavier.

"I submitted my opponent in the third round by rear naked choke," he told Forde Files.

His immediate goal -- to compete on The Ultimate Fighter reality show on Fox Sports within a year and a half – would be sweet satisfaction for a young man who was spurned by the military.

"I started doing mixed martial arts because I was turned down by the Marines, Navy and Air Force due to lung surgery I had my senior year in high school," said Meister, a 2009 graduate of Tehachapi High School. "They told me that I was a potential hazard and probably wouldn't be able to keep up. So I decided to do the toughest thing I could think of – start training MMA."

Meister had been training in his garage in 2012 when his buddies urged him to try out for McCarthy's academy fight team. He did, and made the team.

Meister competed in jiu jitsu from the academy, winning first place at Grappler's Quest in Las Vegas in 2013 and at the MGM Grand in 2014. He competed on a world championship level, taking second place at the Walter Pyramid and first place the All Americas tournament in 2014.

Three of his sparring partners at the training academy have been on The Ultimate Fighter show, he said. Meister plans to be patient in his quest, scheduling a fight every two months. The next one is in January at the Hollywood Park Casino.

Meister plans to teach on weekends.

"My goal is to have a good resume where I can open up my own gym on the side and keep teaching," he said.

Meister said he did not participate in wrestling at Tehachapi High School because he was not comfortable with the singlet the competitors wore. "I didn't like it," he said. "Now I wish I had [wrestled]. I would give anything to go back in time."

Meister works for Reddig Excavation in Bakersfield, driving a tractor and checking grade. He plans to move to Bakersfield.

His parents are Darla and Richard Meister of Tehachapi.

In contrast to the rough fight game he has chosen as a career, Meister has a gentle message.

"I would like to thank everyone who has supported me so far, and through God all things are possible. It doesn't matter what situation you are put in, you can always be a light in a dark world.

"I want people to know that just because I am doing this sport where you hit and submit each other 'til someone breaks first, doesn't mean God cannot be glorified through it."