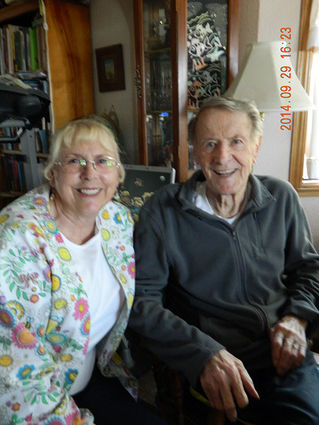 Win Saville and his daughter Gail Purdy enjoy their time together and currently are preparing an application to hopefully secure Win a place on the next Honor Flight to Washington, D.C.

The year was 1942 and a not quite 18 ½ year old young man, Winthrop "Win" Saville, made a choice – to enlist in what later became known as the Army Air Corps. Living in Alameda, California, at the time, Win and his buddy "Teenie" Baker signed their names on the dotted line the day before Halloween. As it turned out, Win was with the first group of Women Auxiliary Civilian Service members (WACS).

"I moved around a lot," laughed Win. "And, despite the terrible circumstances of the war, it was an exciting time for me."

After his training in Kingman, Win again returned to California for two months – this time to the Motor Mechanic School in Los Angeles. Then it was back to Kingman, Arizona, for a time and then on to San Francisco. He shipped out from Camp Stoneman aboard the SS Lurline (an Hawaiian cruise ship). The Luriline made only one military voyage and Win was there, headed to Brisbane, Australia.

It was July and Win had just turned 20 in May. Here he was aboard a luxury cruise ship along with the "Aussies" (6th Division) who were coming out of North Africa and headed home.

"They were respectfully called the 'Rats of Tobruck' by the Yanks," Win recalls. "The MPs sure had their hands full trying to keep the Yanks and the Aussies and the WACS separate," he smiled. "We each had our own decks, but the separation wasn't always successful. All we had was a library and not much else to keep us occupied."

"I spent about two weeks in Brisbane and then headed off to Townsville in northern Australia by train," he recalls. "It took almost three days to get there, even though it was only about the distance from San Francisco to Los Angeles. Townsville's main industry was to process coconuts from the groves located on an island off Townsville," he said.

"The Aussies were a very friendly people and seemed genuinely glad we were there. We felt very welcome there, unlike some of the stories we heard about our troops who landed in England."

After about seven months in Townsville Win was sent to Hollandia, New Guinea for a couple of weeks. "I never got off the boat," he remembers. "I somehow had developed extremely painful boils and never found out what caused them. I do remember that the mechanics in Hollandia were 2nd Echelon."

"I also remember that the reason the troops were moved to New Guinea was to get them out of the way of the Philippines because General McArthur was making good on his promise that he was coming back to Manila and I was part of the 'Return to Manila' invasion."

The Return to Manila invasion took about 6 weeks and Win recalls there was still shooting when he arrived.

"I remember getting off the ship by climbing down the rope ladder and wading through the water to get ashore," he laughed.

"My recollection of McArthur was that he was a great man but wasn't well-liked by a lot of the troops," Win said. "We could see the mansion he lived in from where we were housed, but we never got to meet him."

"From Manila I was flown back to New Guinea, this time to Biak. I was there about five months and I still can remember how hot it was. We used to bum airplane rides just to cool off. And the water – it was really bad-tasting. But it was bad everywhere overseas," he recalled. "Maybe because it was stored in lister bags and had bleach added to it as a disinfectant. Most of the GIs learned to drink coffee just to tolerate the bad-tasting water," he laughed. "Me ... well, I didn't learn to drink coffee until I went to college after getting out of the Armed Forces."

From Biak, New Guinea, Win was flown back to Manila for two months where he became a Provost Sergeant of a Japanese POW prison.

"The Japanese POWs there had surrendered and I remember how intelligent they were. They were always polite and pretty subservient. If they got into trouble for something we'd have them stand in a circle, usually for about eight hours, and if they got out of the circle they'd get shot."

"The US was shipping the Japanese back to Japan as quickly as they could," he remembers. "We were having trouble getting enough food to feed them and there was some resentment among the US troops because of it. The Japanese had to work for their food. They were good workers, humble people and very smart. I remember they were English interpreters and very proficient at using typewriters, typing in English. This truly amazed me."

Leaving Manila on New Year's Day 1946, Win arrived back at Camp Stoneman in California (near Sacramento) where he was discharged on February 3, 1946.

Win married in 1949 and has four children, three sons and a daughter: "Wink," (a computer 'guru' for Google), Gail Purdy (a school nurse at Jacobsen Junior High), Kenneth (an entrepreneur) and Marshall (who got his engineering degree at Cal Poly). All of them live in California, fairly close to Tehachapi. Win has eight grandchildren and 12 great-grandchildren.

"I am grateful for the experiences I had," he said. "It gave me the opportunity to attend and graduate from the University of Minnesota in 1953 and also enabled me to purchase a home for my family in Torrance." 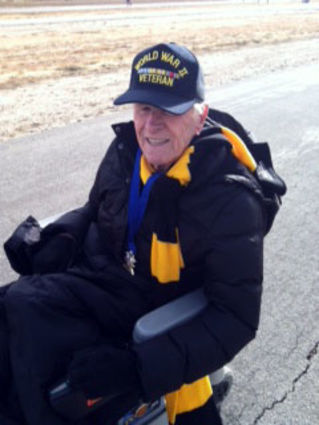 Win Saville participated in events at the recent Warbird festivities at Tehachapi Airport and came home with a medal.

Win's daughter, Gail, moved to Tehachapi in 2005 and Win followed in January of 2014. They are in the process of filling out the application for the Honor Flight to Washington, D.C.

"It's a complicated process," Gail shared. "Those in bad health are accepted first, then WW II veterans, those who are terminally ill, then veterans from the Korean War, the Viet Nam War and then those from all the other wars (like Desert Storm, etc.). We're hoping he'll be accepted soon."

In this writer's opinion, our veterans, from all wars, are a national treasure. They all gave some and some gave all. Please join me in remembering to thank them every chance you get for the freedoms you enjoy today and please keep those who currently are serving and their families in your prayers.