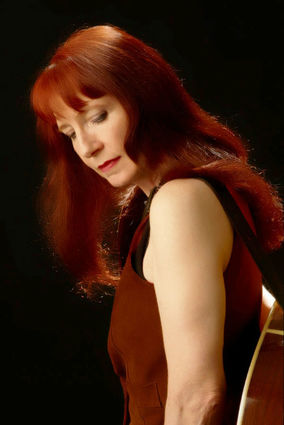 Over the last couple of years, several people have asked us, "Do you think you could ever get Katy Moffatt to play here?"

We can now give them an answer: "Yes! She'll be here in concert at Fiddlers Crossing on Friday, August 8, at 7:00 p.m.

I have known Katy Moffatt for many years, having recorded her numerous times for the Folkscene radio program based at KPFK, Los Angeles. The program is heard over a number of stations around the world as well as throughout the U.S. Katy, a singer-songwriter, has been one of our favorite guests over the years.

It's hard to put a label on Katy Moffatt. She's a little bit country and folk, a little bit rock, and mostly, a whole lot of beauty and soul. This fusion is now being dubbed, "Americana." Katy was a pioneer in a style that later infiltrated the popular culture through singers such as Alanis Morrisette.

Katy grew up in Fort Worth, Texas, where her grandmother, a concert pianist, taught her to play piano. She told us she used to listen to the radio while doing her homework, and was inspired to learn guitar by listening to the Beatles.

During her college years in Santa Fe, she fronted blues and jug band groups, starred in a production of "The Fantastiks," and was cast as a folksinger in the film, "Billy Jack."

Katy moved to California in 1979 and appeared on the groundbreaking album, "A Town South of Bakersfield," a compilation with kindred spirits such as Dwight Yoakam and Rosie Flores. From there, she was cast as a singing performer in films, became popular in Europe with the release there of a CD collaboration with Steve Berlin of Los Lobos, and began a songwriting relationship with prolific singer-songwriter-producer Tom Russell.

Katy now tours throughout the United States, Canada, Europe, Australia, and New Zealand. We're thrilled that she is adding Tehachapi to her concert itinerary this summer. I, for one, can't wait to see her again.

As always, you can find out more about our featured artists at their webites and watch videos of their performances on Youtube or our website. Check Katy out online at http://www.katymoffatt.com

Fiddlers Crossing is at 206 East F Street at Robinson Street, in Downtown Tehachapi. Tickets may be purchased online at fiddlerscrossing.org, or next door at Mountain Music, Tehachapi Treasure Trove, Tehachapi Furniture in Old Town, and Lucky's Barbershop in Downtown, or with a credit card by calling 661-823-9994. Tickets to the concert are $20, and as always, coffee and goodies are included. The concert begins at 7 p.m. Doors open at 6:30p.m. Fiddlers Crossing shows have been selling out, so be sure to buy or reserve your tickets ahead of time.