Flight of the Canines 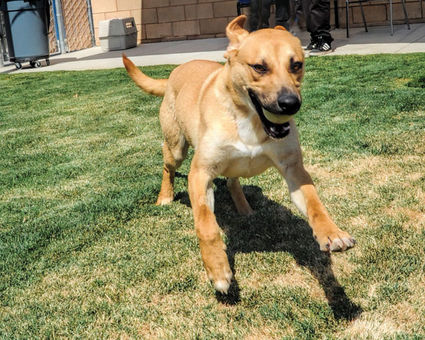 On Friday May 23 my friend Molly Mackin and I went to the Bakersfield City shelter on Mt. Vernon Ave. We decided to be brave and go photograph some dogs and try to get them homes before their demise dates.

Rather than turn us away, the head of the city shelter Julie Johnson welcomed us; despite the fact that she was dealing with the furor over the dog that bit the boy and was chased by the cat! People were calling from all over the country to save that dog and she was busy telling the news media and other callers that there were hundreds of sweet, friendly dogs that need to be saved – to come on over and rescue those instead!

I am with Save Tehachapi's Orphaned Pets, a small dog rescue, but Julie said..."photograph the large dogs today because the small ones are about to be flown to Washington state by Wings of Rescue, out of Van Nuys. Wow...what a story! An angel named Trixie Hodges, who lives in Taft, was the co-ordinator of the Bakersfield chapter of the move. I called Trixie, and she said it was true. She asked for our help, because her rescue, United Thrift and Rescue, was short staffed due to personal issues.

On Tuesday May 27, I met the vivacious and very focused Trixie and one of her cohorts at the Bakersfield shelter, and the three of us went around pulling dog paperwork from the cages of the dogs we could to save. I got to put yellow ribbony tabs on the cages, delineating which rescue they would be flying to. Talk about a gratifying job! We saved 54 small dogs that day.

The challenge, says Trixie, is the crates. Sometimes the plane flies in and there is enough room on the plane but there are not enough crates, and some of the dogs can't go. There must also be health certificates for each dog to leave the state.

Chelley Kitzmuller of Have a Heart Humane Rescue in Tehachapi, donated 21 crates that she was about to sell in a yard sale, another awesome piece of serendipity and generosity for the cause. Other folks picked up the 21 crates, cleaned them and then dropped them off at the Bakersfield County Rescue on Fruitvale the day before the flight.

Where do they go? This last set of flights went to three places in Washington state and the next will go to Idaho and Montana.

Wings of Rescue is a group that includes pilot volunteers that fly small planes. Each of the three flights on May 30 cost $10,000. Animal lovers must be generously donating.

Strangely enough STOP had decided to try to find rescues to caravan dogs out of state, unknowingly the same idea as what Wings of Rescue and Trixie were doing.

We had just had a rummage sale, and we donated some of the money for gas to the pilots. Finding the rescues was to be our summer challenge, so far we had struke out. Now that is all done for us!

Trixie also has other destinations. A rescue in Connecticut pays for Chihuahuas to be flown in! Chihuahuas are the breed we have the most of in Kern County shelters. Pit Bulls are second. In 2010 about 1,000 dogs a month were euthanized. Sometimes other counties will accept a few of the foster dogs, and Trixie and friends drive them.

Judith Sanford and Lynda Pearson of STOP were at the Bakersfield Airport with two of STOP's foster dogs that had been sitting in foster for months and months, getting no calls. They watched as three planes flew in and carefully arranged the crates of 109 dogs.

They stayed to watch the dogs fly off to Washington to rescues that have excellent facilities. Those rescues will find good homes for the dogs in a very short time period.

The main problem is, obviously, that spay and neuter needs to be addressed in Kern County. Backyard breeders – those that just dump their dogs at shelters, abandon them or pass them out to unsuitable homes – need to be stopped. Trixie says there is an excellent law in Santa Cruz. AKC registered breeders, police dogs and dogs for the handicapped may be bred, but all other dogs must be spayed and neutered. She would like to get that law passed in Kern County as well. It will take organization, signatures and jumping through legal hoops to get it on the ballot. If this is an issue near and dear to your heart maybe we could all work together to make it happen. We need someone who will take this on, and staff of the many rescues will help!

If you can donate crates or give a tax deductible contribution to STOP for us to buy crates, your support would be much appreciated. Call STOP at 661-823-4100. We also need more fosters. If we had more fosters we could save more dogs. Now that we know that we can be part of the out of state transfers; it will free up our fosters, so it doesn't have to be a full time commitment – maybe a few weeks and then take a break. 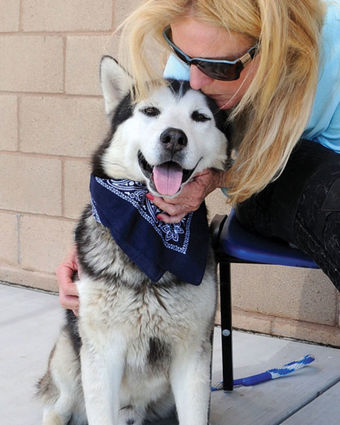 When Molly and I went down to Bakersfield to take some photos, we photographed ten large dogs. It was heart breaking. They were so many sweet and good looking dogs. One was a full bred Siberian Husky that just wanted to sit next to us. We let a few of the dogs – Labs and Pits especially – off their leashes, and they ran and ran around the play area – so happy to be out of their small cages. I hope someone came and got them.

Though sad, our efforts were rewarded by finding the energetic Trixie and learning how we could come together with many other rescues and help these magnificent creatures that (in my humble opinion) have just as much right to be here and have a have a life as we humans do. Not only did we save 109 dogs last May 30 but 109 homes in Washington will have the joy of having a new best friend.