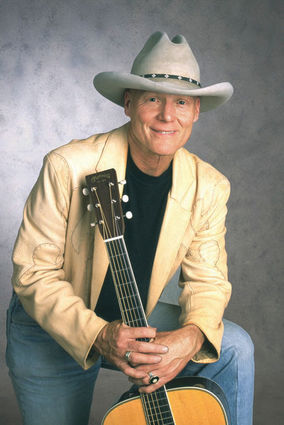 When reviewers first dubbed Chuck Pyle the "Zen Cowboy" he decided to be true to his motto: "Always ride the horse in the direction it's going." He took the nickname to heart, shaving his head and blending his upbeat perspective with old-fashioned horse sense.

Pyle will perform at Fiddlers Crossing on First Friday, May 2, at 7 p.m. His music is an infectious blend of hummable melodies, straight-from-the-saddle poetry and quotes from bumper stickers, proverbs, world leaders and old cowboys. Critics have called his songwriting "musically sophisticated yet full of uncluttered space." His brilliant finger-style guitar playing is said to be "more like a fine classical or jazz soloist."

Also admired as a sly humorist with a Will Rogers-style wit, Pyle has performed for the Colorado legislature, on "Austin City Limits," and in the home of Bill and Melinda Gates. His songs have been recorded by John Denver, the Nitty Gritty Dirt Band and Suzy Bogguss, among others. He writes songs about love lost and found, forgetful cowboys, heroic highway patrolmen, and brain stems gone "critical". Country music lovers know him best for writing, "Cadillac Cowboy," recorded by Chris LeDoux, and "Jaded Lover," recorded by Jerry Jeff Walker.

While fans love his recordings, they adore Pyle's live performances. Juni Fisher, the "Cowgirl Balladeer" who has performed at Fiddlers Crossing several times, says of him: "Chuck Pyle paints the vistas of the West...heck the whole country...through his smart, snappy, cool lyrics. He's been one of my heroes for a long time, and if you love (Western singer) Dave Stamey, you are also going to love Chuck Pyle. You have my word on that!"

Pyle hails originally from Iowa but has resided on the front range of Colorado since 1965. He has been sharing his gifts for over 40 years and still performs 100 dates a year all across the country, playing festivals and theaters, coffeehouses and house concerts.

Fiddlers Crossing is at 206 E. F St. at Robinson Street, in Downtown Tehachapi. Tickets may now be purchased online through the website at http://Fiddlerscrossing.org. They will also be available – while they last – at Mountain Music, Tehachapi Treasure Trove, Tehachapi Furniture in Old Town and Lucky's Barbershop, or by reservation by calling 661-823-9994. Tickets to the concert are $20, and – as always – coffee and goodies are included. The concert begins at 7 p.m. Doors open at 6:30 p.m.