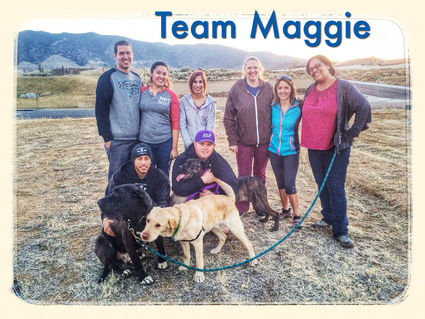 Since the moment of her escape on Christmas morning, several volunteers and friends of Marley's Mutts had scoured the landscape for any signs of Maggie with no luck at all.

On the fourth day of Maggie's "pilgrimage", several volunteers met to formulate a plan for her recovery. We split up into teams to cover as much ground as possible. Some hit the original disappearance zone with their dogs. A couple of us hit every agency and local business in town, posting flyers, summoning help from local law enforcement, police officers, and pilots who agreed to be on the aerial lookout for a moving blur of brindle fur. Meanwhile, the others of us brought Maggie's dog friends with us and trekked around Brite Lake and surrounding areas for hours. We found a large dog's paw prints scattered across a muddy path near the lake. But this area is about five miles from Warrior Park (where Maggie had last been seen). So eventually we decided to look elsewhere.

After about three hours of investigating and plotting our next moves, we decided to recharge with some lunch. Just after we all caught our breath (and ordered drinks and meals), we got a tip that someone had spotted Maggie up in the hills at the top of Tucker, across Highline. All but a few of us threw cash down on the table and ran, while the others hung back to pay the bill and get the food to go.

By then, we were getting more and more calls or mentions of sightings from locals. Our Facebook feed was blowing up with tips, as the virtual public watched this incredible story unfold. Every phone call between search party members revealed a narrowing radius closing in around Maggie. We got word that she was running in a field parallel to Highline, very close to where she had originally taken off. All of us sped that way, and actually laid eyes on our girl for the first time in four uncertain days. From that moment on, it was like a fast-paced scene out of a Hollywood blockbuster!

We ended up in a housing development where Maggie was spotted high-tailing it up and down the streets. Some of us ran on foot with the dogs while others patrolled in cars, burning rubber through the small residential neighborhood like race car drivers, cutting Maggie off at various passes.

It all finally came to a crescendo at Warrior Park, the very spot from which Maggie had originally bolted! All the searchers in speeding cars, all of us running at top speed, all the neighborhood boys on scooters who had joined in the chase...we all converged and formed a circle around Maggie, who submitted when she realized she had nowhere left to run. The most emotional moment for me was seeing my service pup in training, Fred, run to Maggie in that field, licking her and pawing at her, at which point – for the first time in the several hours we'd had our eyes on her – she stopped. She stopped completely, and then we all ran to her and hugged her and shed tears of relief and happiness to see that she was with us and she was okay.

While we reveled in Maggie's homecoming that evening, we also knew that our work wasn't finished. The morning we went out to find Maggie, we learned that another of our dogs, Diamond, had busted out of her foster family's yard in Bakersfield and had taken off. So the following morning, "Team Maggie" assembled again and headed to Bakersfield, resolved to bring Diamond home just as we had Maggie.

We trekked around multiple neighborhoods, handing out flyers and talking to residents. We hit several parks, including one where Diamond was theoretically spotted getting into the front seat of someone's pick up truck. We then got word that someone had spotted a pit bull in the Walmart parking lot, where we skateboarded around with flyers in hand and a slip leads hanging around our necks – just in case.

No luck there, so we headed over to a canal where a volunteer had noticed a broken gate and a viable water supply. We combed the canal up and back, but saw no sign of Diamond. Meanwhile, my hope had begun to fade along with the late afternoon sun.

Of course, it was then that I got the phone call that changed everything. A Facebook fan of Marley's Mutts, who had been watching things unfold online, called to let me know she had just seen a dog she thought could've been Diamond, trotting alongside the road on Buena Vista between White Road and Campus Park. Amazingly, this woman had gone out to "casually" look around for Diamond on a whim, and within literally five minutes of driving, she spotted her!

We sped toward the location, and there was the dog that – indeed – looked a lot like our girl. We couldn't believe our eyes, but when we called Diamond's name and she looked our way, we knew we had her. So off we went again, running at hyper-speed through an oil field spotted with a maze of sprinklers, while our driver raced the car to a perpendicular road ahead to stop Diamond in her tracks. 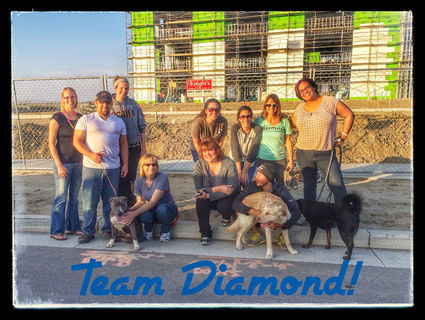 Again, it is at this point that I struggle to find words to express the moment of reunion in mere words. But there was a miraculous convergence of cars and dogs and people that ended with Diamond safely in our arms.

These recoveries were no less than miraculous, and amazing examples of what can happen when people work together!

Barabara Ferrante invited the volunteers who helped search for Maggie and Diamond to On The Blvd. for a complimentary lunch, and presented Marley's Mutts with a $500 donation. See page 21 for a group photo.